I am so glad that I can FINALLY show you something that isn´t from Out Of The Closet series again! It is the first finished object since I started working in Estonia and the available time and energy for my hobby diminished remarkably.

As I have mentioned before, I wanted to finish the dress for the Christmas party with the colleagues and I managed right on time. The photos were taken during the party and after some prolonged sitting at the table, so forgive me the slightly wrinkled look of the dress.

The pattern is rather old – Burda 11/2008 issue, model 135, but I think it is kind of an evergreen style. There is a really nice version of the dress here. This is what actually made me fall in love with the pattern in the first place, the black Burda version is not really inspiring. 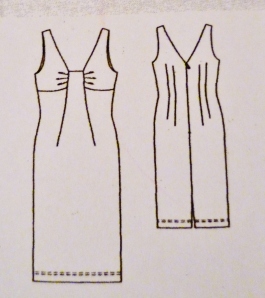 During my long holiday in Estonia in summer, I borrowed a bunch of Burdas from the local library and traced quite a lot of patterns (because I never thought that just a couple of months later I would make such a huge step of moving here for a longer period). This is one of them.

The pattern is easy to sew and the only more complicated part is the front pleating and maybe the shoulder seams, since the upper part of the dress is lined.

The material, slightly stretchy cotton sateen, is probably my favorite fabric to sew with. I got the fabric among some others just before leaving Athens and it was bought having this pattern in mind already.

I didnt make any major alterations to the dress, apart from having to take in at the shoulder seams, in order to bring the whole thing up a bit. It is a bit of a nuisance as anyone who has sewn similar shoulder seams knows, but I chewed myself through and thankfully this fixed the problem.

I also had to take in slightly at the side seams, which was somewhat of a surprise. I didn´t use double needle for hemming although this is what the pattern calls for. Instead, I folded the hem over and hand stitched it so that the stitches are not visible on the outside. I thought it would look nicer but actually the fold still shows so I don´t think I gained much from all the hand sewing. If I made the dress again, I would probably go for the double needle.

Due to the lighting conditions when taking the close-ups, my skin resembles remarkably to a very famous lady 😀 :

The seam allowances were finished off with bias tape. I actually like that the tape is not in an identical shade with the fabric. The lining (or should I call it facing?) is attached at the side seams and front by a few hand stitches. 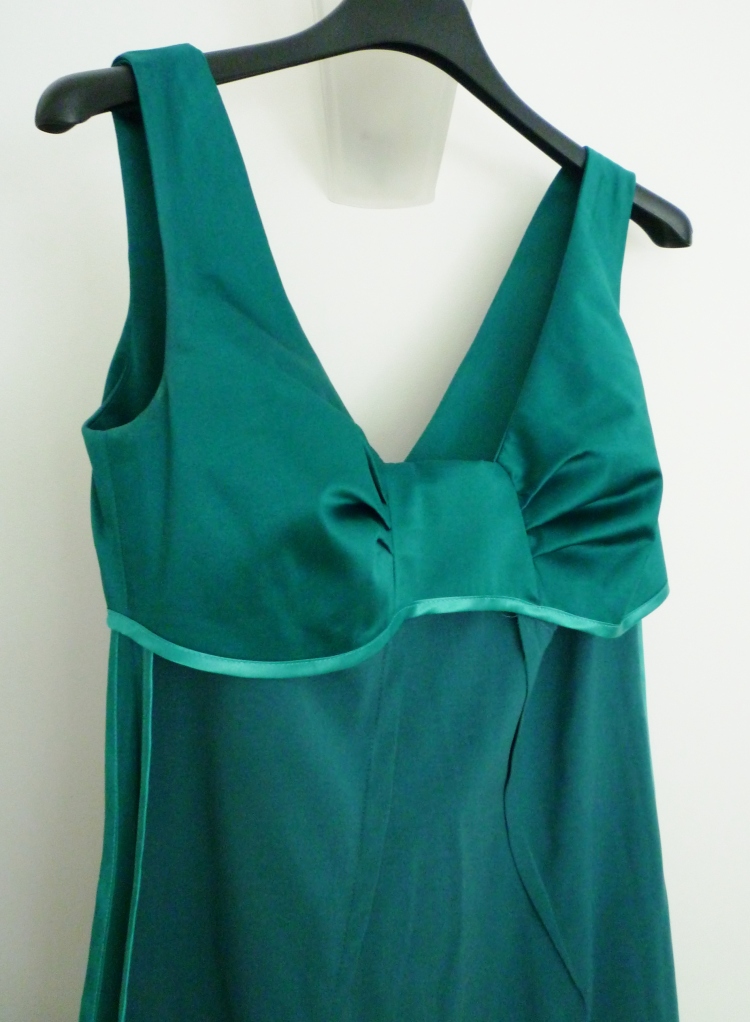 The photos were taken by my sweet colleague Merle: 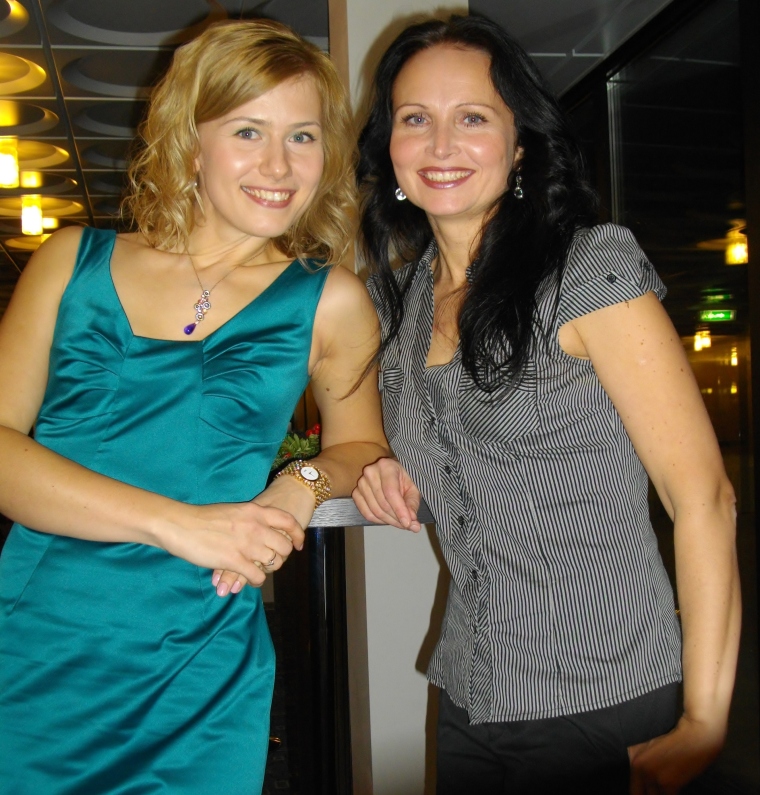 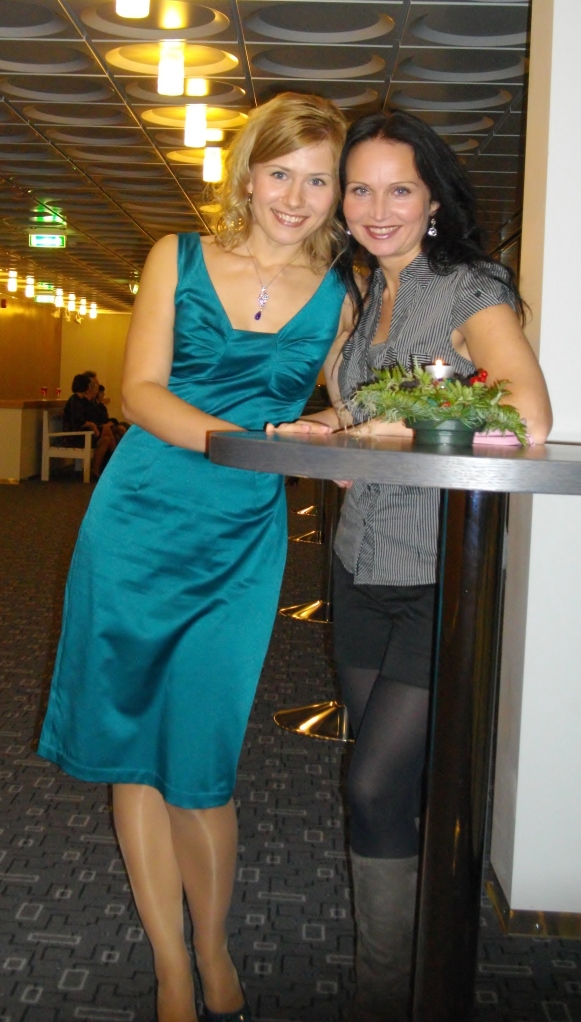 The shoes I am wearing are Bourne Christy. Probably my favourite party shoes, they are not too high and they always catch a lot of positive attention.

The Christmas party was fun as well, I danced quite a lot which is good, since I can´t remember the last time I did so!

To my great surprise, I noticed that I made this last dress of the year in The Color Of The Year 2013, according to Pantone  (“known worldwide as the standard language for color communication from designer to manufacturer to retailer to customer” as they say on their website) – emerald.

Anyone who is more interested in the topic, can also check out their fashion color report for spring 2013, that includes more shades in addition to the emerald.

To be honest, I prefer sleeping in my own bare skin, but knowing that I was going to share the hotel room with my colleague and also knowing that the night set that I wore the last time we did that would not fit me anymore, I made myself this set of @stylearcpatterns camisole and @wardrobebymepatterns Easy Shorts. The latter is a free pattern on their website and the camisole was last month's freebie of style arc (and I had just purchased it the month before..) I love the result and I don't know where did @abakhanbrand find this fabric but it's gorgeous... And I think it was majorly discounted last year when I bought it, why else did I get enough for this set and have a whole dressful left over?
Not bad for the first try! Had a great time and completed my first bra today @studiocostura @studiocostura lingerie sewing course. The materials, knowledge and the pattern were provided, just sit and stitch! I never thought that I would even try this, but the first attempt is encouraging enough, so probably I will make another one pretty soon! Studiocostura also provides her own patterns that come with excellent instructions, so I encourage you to to try them! #lingeriesewing #brasewing #sewistsofinstagram #imadethis #imakemyownclothes #sewingcourse #newskills #simplicity8229
#lingeriesewing #newskill #letsgo #sewingcourse
Another little throwback to summer on my blog at thelatenightsewist.com @stylearc #saannabellewovendress @abakhanbrand #sewistsofinstagram #imakemyownclothes #imadethis #wrapdress
It seems that we are done with summer for this time.. A little throwback to about 2 weeks ago when this outfit was still appropriate: @stylearcpatterns #sacharlieskirt and #sastaciejeanjacket. The fabric of the top is from @blackcarrotfabrics #sewistsofinstagram #imakemyownclothes #imadethis
The feeling when you have completed your third pair of @stylearc #sachristiapant and can finally wear your vision combining khaki with high contrast striped #sadorothywovenjacket. #sewistsofinstagram #imadethis #imakemyownclothes #stylearcpatterns