Would you believe that with all these years of sewing, I never made a maxi dress? This one is my first!

I have a few ready-to-wear ones for summer, but generally I prefer to enjoy the warm weather in short and light clothes. There is only one maxi dress that I have worn to pieces and it is made of very breathable and lightweight cotton batiste.

However, as the annual Christmas party at my workplace was approaching fast, I needed something that would tick several boxes – appropriate for the environment since this years party was held at an old art nouveau style mansion (it is worth checking it out: Ammende villa), easy and quick to make since I was running out of time, fit me in the current circumstances and preferrably be wearable in the future. I managed to tick all those, plus as a bonus, I could use up some of the fabric from my overflowing stash! Win-win!

So the lucky winner pattern was Vogue 9104:

I am very happy I took the time to look up some blog posts on this pattern because a few of them mentioned the problem with the armholes being too low-cut. I guess it has to do with the weight of the fabric as well, because you need 4.1 meters of it for size 10 and the armholes can easily be dragged lower by the weight of the dress! The pattern also recommends lightweight jersey, but with this amount of fabric, jersey would definitely stretch even more, causing the armholes reaching too low. So just to avoid the trouble, I raised the armholes of my dress by about 2,5 cm and I am thankful I did! Instead of using the facings provided with the pattern, I used bias tape to finish them, another tip from one of the blogs I read! 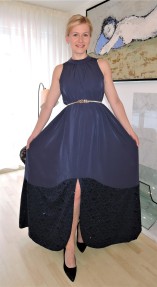 It took me a while to decide what to do with the lower contrast part of the dress. I had just enough fabric in my stash for the upper part of the dress and I had it already cut out, so the task was to find something suitable for the contrast. It was really not easy. I considered sequins, but eventually they were not in the right shade; I was also thinking about using silvery lurex, but I was afraid the end result would be something in the lines of Ded Moroz, the slavic equivalent of Santa Claus:

In the end I bought some glittery stretch lace and backed it up with matching lining fabric for the lower pieces:

This meant I had to cut the lower details out not four, but eight times and additional seams to join them. Not hard to do, but so time consuming, especially because the lining fabric is slippery and the pieces are quite big. It took a lot of pinning, basting, pressing and sewing. The seams are really long as well! And yes, the glitter was all over the place!

As you can see, the photos are taken at my parents place and my shoes don´t really match the dress, I just borrowed them from my mom for the photos. We actually tried taking photos at the villa since we stayed the night there but initially the cameras battery was dead and the next moment we had time to take the pics was at 3 AM, my husband almost asleep and my own face sleepy as well. The light conditions were not ideal either, but we took a few before going to bed: 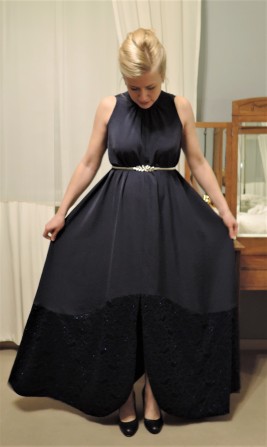 The belt I am wearing was a must, I would have felt huge otherwise. It is metallic, but very elastic like spring and I love the leaf motif of the front closure:

Honestly, in my opinion this dress is as good as it gets in terms of the choices an expecting mother has for an evening gown! It is very comfortable and shows enough while hiding enough at the same time! For example I got really tired of wearing tights during the evening and due to the length of the dress, I could just remove them and go on without anything digging into my belly. In addition, since the lower contrast parts are not joined at all, the slits in front and back are quite deep, so there is some sex appeal to the dress as well.

Another great tip I got from reading blogs was to cut a size smaller than usual due to the really extreme looseness of the pattern. So instead of my regular 12, I cut it in size 10 and I think it was absolutely worth it. I also omitted the side pockets, because… who would need them really?

While the dress was halfway finished without the lower pieces attached yet, I also discovered that it would make a great summer dress in short version.

And last but not least, we had a professional party photographer, thankfully, so we managed to get a pic together with my husband, too:

We have a collective holiday every year during the Christmas and New Year so I am totally enjoying it now, preparing some patterns and sewing but also meeting friends and spending time with my family.

Just a few days left until Christmas, may you all have beautiful holidays with your loved ones!

10 responses to “The Blue Gown”