Some things apparently so simple to make, may take a lot of energy and work and then there are others that look hard to make, but in the end turn out quite the opposite. This was the case with my last project, a dress for my brother´s graduation day (I cannot believe how grown up he is!).

It took me a while to get started because of doubts about how to actually go about it. I read several articles and blog entries online in order to choose the best approach for working with this kind of lace.

In the end I decided that it is the best to try to underline it. What confused me was that I could not find any answers to whether adding a lining is a common thing to do once you have already underlined the lace or not. I decided to use lining on the bodice part, especially because the front and back yokes without the underlining could then be neatly sandwitched between the layers, but skipped it for the skirt, so that in the skirt part, the seam allowances are finished with bias tape and are visible on the inside.

However, it could be reasoned that since the typical instructions on underlining say that the pieces should be treated as one layer of fabric later on, adding a lining would also be ok.

The technique was new to me, but it was not hard or too time-consuming in my opinion, although some of the articles I read gave me the impression that it would be so.

The dress is actually a mix of two patterns : Simplicity 1415 for the bodice: 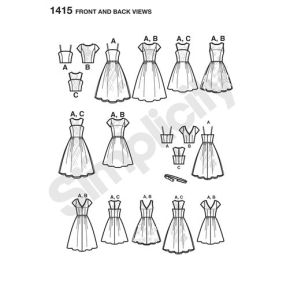 …and Burdastyle 8/2015 model 109 skirt, that I actually have already made as a skirt here.

The bodice of the Simplicity 1415 really attracted me with its sharp angles between the bodice and the yokes, although they are maybe a bit less evident since the lace  is not straight. The pattern actually is for a bodice and a separate overlay, but I used a part of the overlay pattern to create the yokes.

Initially I was worried about how precise the connection between the two patterns at the waistline would be, because I just worked with them separately. Therefore the surprise was great when the two parts matched exactly! But the experience with the Simplicity pattern was that it seems to be designed for quite busty ladies, I had to take in quite a lot from the back and side seams but not at the waist!

I really like how the underlining is barely visible under the skirt, so it is hard to tell where it stops!

I also changed the placement of the invisible zipper. Originally it was meant to be in the center back seam, but I did not want to interrupt the lace, so I moved it to the side seam and now the back piece looks so much better as one!

The neckline and the “armholes” were finished with lace applique trim that I cut off the rest of the lace and hand-stitched to the edges to achieve a similar look as the skirt, which was just cut with the selvage of the lace on the bottom. I could use the skirt I had already made using the same pattern to predict the desired length, since I could not have made any changes to the hem later!

I did not specifically try to make the lace motifs match anywhere, but they do match in several seams which helps to create the illusion as if it was molded out of the fabric without cutting too much.

The lace itself is not really elastic, but the lining/underlining is and thanks to the structure of the lace, it also has some give, so although the dress is very fitted, it is surprisingly comfortable to wear!

Here are some dressform pictures as well (note that this is just a window decoration dressfrom from a shop that closed down, it is not in my measurements, thats why the fit is not that good): 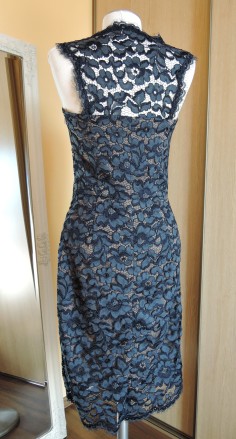 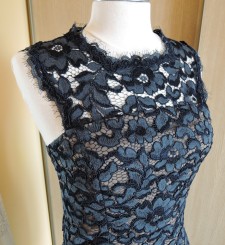 The dress took me two weekends and about 30 euros to make, which I think was absolutely worth it.