I know it has been a while since my last post, but at least I have a good excuse – I started my Master´s studies and since I am also working full time, it is really difficult to manage time between all the things I want and should do – work, studying, sewing, sports and quality time with my boyrfriend. Not all is lost though 🙂

A dear friend of mine arranges (or maybe it is more precise to say that his wife does) a great birthday party every year where everyone gets together for an extreme fun night where usually there is also live music and dancing.

So this event plus a nice scuba fabric I got from Helsinki in September (I go there once a month now for the university) were motivating enough to push myself and sew up another dress.

This is actually a mix of several patterns. The main part is based on McCall´s 6243, but once again combined into one front and two back pieces. I realized that I have used this pattern either in the original form or combined for FOUR times by now, making this the most used pattern in my stash! You can see the three earlier versions here, here and here.

Since I really liked the sleeves of the Baby Blue Stripe Dress (Burdastyle 1/2014, model 107)and I wanted to add some interest to the otherwise once again, plain pattern, I re-drew the armscyes of the bodice in order to add the sleeves. I was worried about this, thinking that I may spoil the whole thing by doing so, but to my big surprise I got it right with the first try. 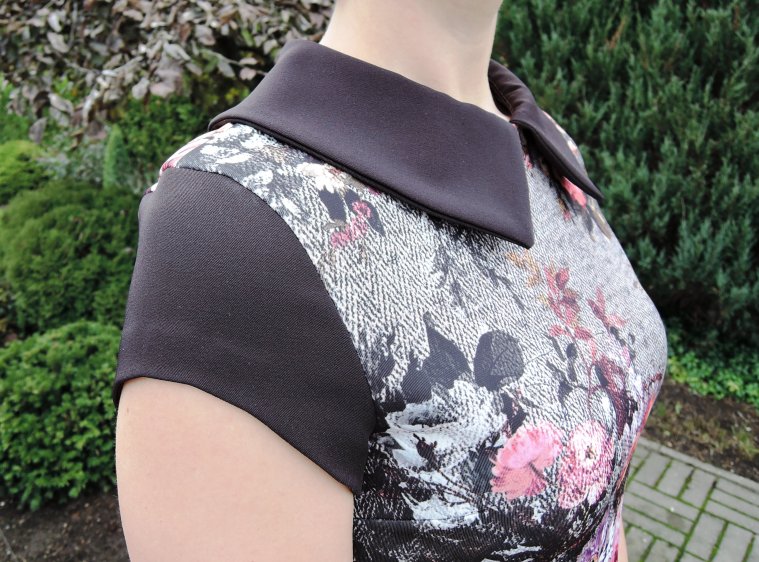 After the sleeves were in, the neckline still seemed to lack something, so I picked a random dress collar (it was another Burda pattern) and followed the pattern at first, but ended up changing it quite a bit. Again, considering the randomness of this, the collar looks quite good to me, maybe it could extend just a little bit further to the center of the back.

The hemline is unfinished, which is the first time I tried this. At first I planned hemming it properly, but the dress would have been a tad too short after that and I have seen this kind of shortcut/design element on RTW items, so I decided to let it be.

The photos were taken on the day after the party, because as always I was in such a hurry that I finished the dress an hour before leaving the house and there was simply no time. However, I got several compliments on the dress and it felt really good!

Another piece of news is the glasses that you see on one of the photos – these are my first ever and I should wear them while driving or working long hours on the computer in order to avoid getting my eyes tired, but I like them a lot and sometimes decidedly wear them elsewhere as well.

Sewing-wise the next project should be the annual Christmas party dress. I have the idea and the fabric, now I just have to perfect my time-management skills in order to finish it on time!

16 thoughts on “The Autumn Flower Dress”