Hi from Helsinki (and Happy Independence Day to all Estonians!)

It has been quite a while since my last post. One of the reasons is the increased work load due to my promotion and getting used to it, but more importantly I would say it is the northern light conditions in winter, which do not help with taking presentable photos at all.

A good camera helps a bit, which is why I immediately took advantage of my friend Triin while visiting her here in Helsinki for a few days, although as Finland is even further North from Estonia, there is not much light here either these days.

So this is the latest project: 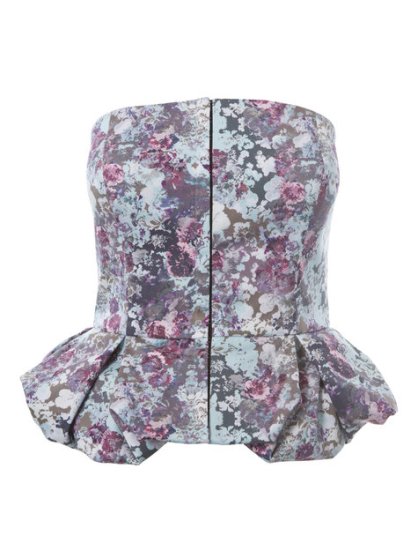 I cut my regular Burda size 38 and it fit without problems, apart from having to take in at the back center seam because as I cut my fabric on bias, it stretched out a little and the pieces became wider than necessary. I guess I lost some length due to this as well, but luckily no problem with that. The fabric is the plaid cotton I got from Denmark in late autumn.

Burdastyle has made a very annoying change in their pattern selling policy recently, which caused me some trouble sewing this bustier up. Until recently, all the instructions files were available for free downloading and as I sometimes could not find BurdaStyle magazine in English, I got it in Russian or German instead, just to get the patterns. And when my high school level Russian or German failed while sewing a project, I always knew I could use the English instructions from the website.

Although this bustier has detailed illustrated instructions in my German BurdaStyle October 2013 issue, I still needed further help while sewing it and was really disappointed to realize that the party is over and the instructions are not available anymore. On the other hand, I was already halfway through the project and it was funny to feel how only when the instructions were not available, my brain really started working, trying to find a way to finish the piece. I managed in the end and satisfaction was even greater 🙂 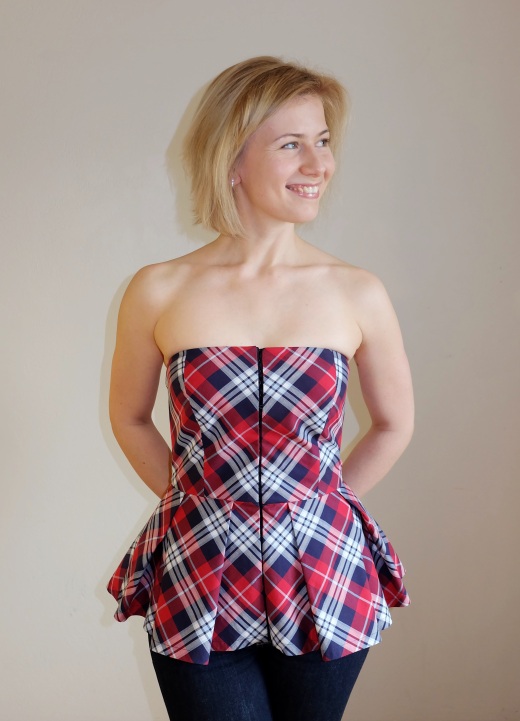 As you can see, I have made some alterations to the original pattern. I really planned to make it according to the pattern, gathering the peplum with an elastic band and all, but when I tried it, it looked ridiculous on me, so I quickly changed the game and went with a more flattering pleated peplum instead.

It is amusing that when I was about to cut my fabric, I realized Meg from burdastyle.com had already finished her version, also in plaid fabric! I thought, ok, I will make mine at least with the gathered peplum, so it is still different. And then I got to the part where gathered peplum was not an option for sure 😀 I wonder if this was the process in Meg´s case as well….

I lined the bustier with the wonderful navy stretch lining I got from Poland in summer. It is not attached at the bottom of the peplum, so the peplum is basically double layered. I did quite a lot of hand sewing to attach the hook and eye tape and the lining around it. 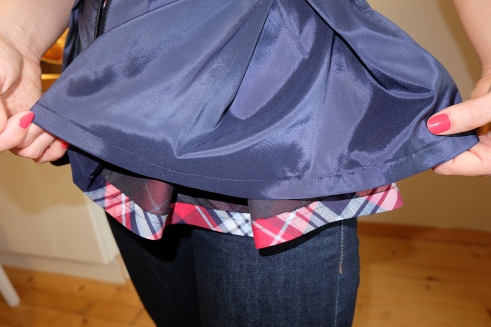 Since I tried to do my best matching the plaids up, cutting the fabric was also unusually time and energy consuming. I wanted to make sure things would line up in the end and in my own opinion, the front part looks ok, but there is some mismatching happening on the back side. However, nothing tragic.

I still have one more day here in Helsinki and of course I have done some fabric shopping already, but there will be an extra post about this.