Here is the second dress I made in October, for one certain occasion – to celebrate my 30th birthday with a special present I made myself – Ludovico Einaudi concert in Copenhagen.

As some of you know, I didn´t really celebrate the round number with a party and decided I would enjoy an event like this much more. The decision was made in the first days of September already and I am so happy I made that choice! The following photo is taken at the Koncerthuset Copenhagen on November 2nd, I guess it shows that I am completely excited. 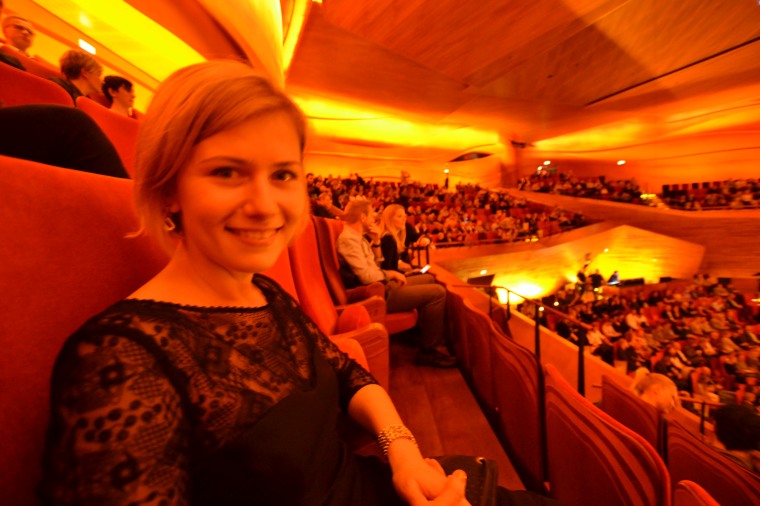 I used McCall´s 6460, view D vith a few modifications. I cut size 10 at first and realized to my horror that it was too tight around the hips. I was lucky to have enough fabric to cut another dress, still size 10 at the bust but slightly wider at the hips.

As I was about to throw the smaller version away, a colleague of mine said that she would like a similar dress and that it would probably fit her, so my next project will be sewing basically the same thing for her as well! 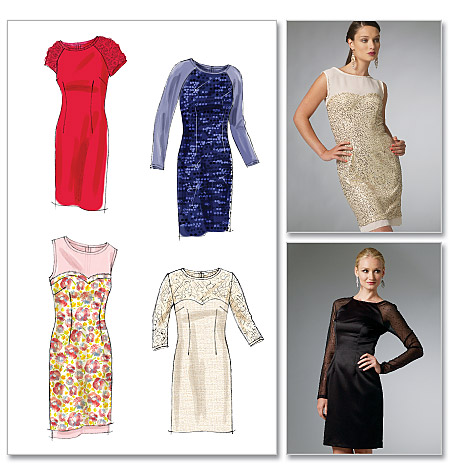 I decided to sew the invisible zipper only on the fabric part of the dress since I thought the zipper would not look very nice on the transparent lace. At first I believed one small button would do the job on the lace, but I ended up with four, since the lace was gaping awfully. I wish the back would look more professional (there are gaps between the buttons), but on the other hand the small buttons can also be considered a special detail, right?

By the way, the following photos were taken the day after the concert and after having cycled (yes, it is Copenhagen after all!) from one bar to another at night. The dress tolerated it all and I didn´t even iron it for the photoshoot!I know it shows that I am still sleepy, that it is quite cold and windy, but just try to concentrate on the dress, ok? 🙂 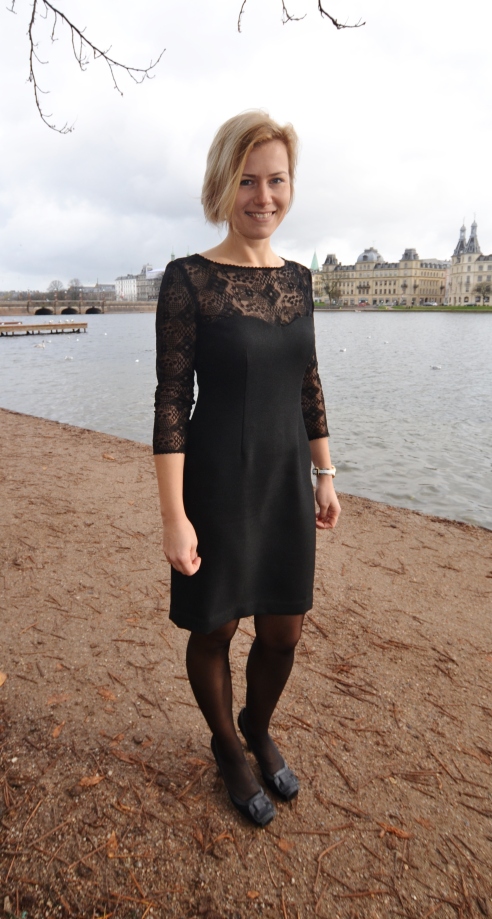 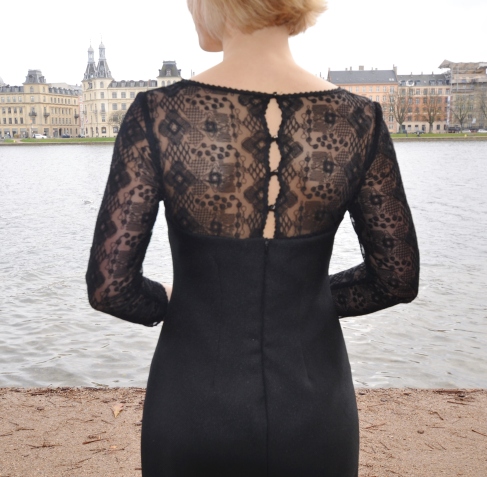 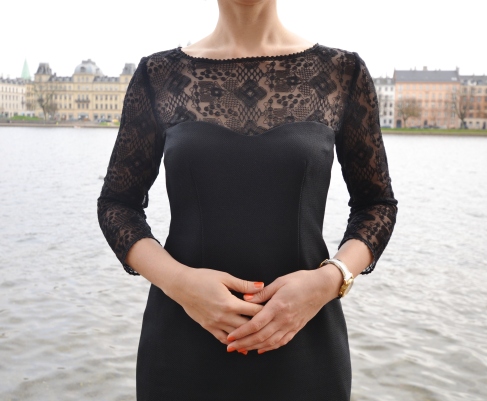 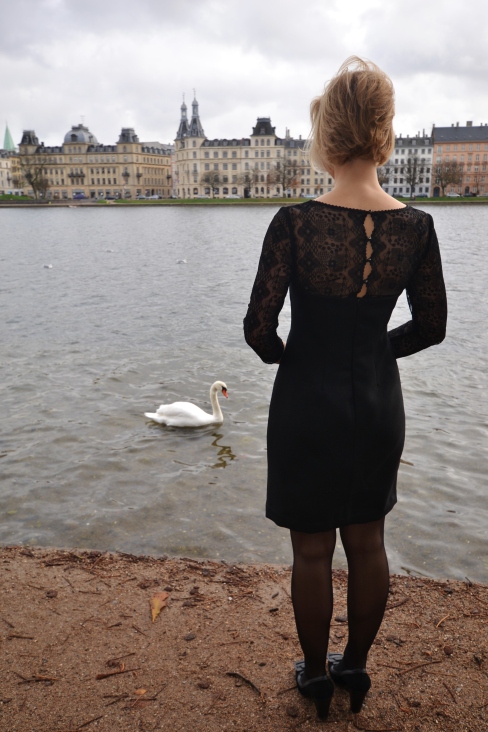 Another big alteration was using a lining. The main fabric is fraying like crazy and I knew I would not like the inside of the dress like this, even though I bias taped all the seam allowances. So I used some of the super comfy black stretch lining I got from Poland in August. This makes the dress look nice from the inside as well and I think the fit is much better, no clinging to the body and it has a nice move when I move.

I used French seams for the lace everywhere and lace trim to finish the neckline and sleeves.

I had to make the sleeves a lot narrower than the pattern suggested because I think lace sleeves should fit tight.

The main fabric and the lace is from Athens and as I recall the fabric was like 6 EUR/m and the beautiful lace only 3 EUR/m. This makes me want to visit Athens ASAP! (By the way, it is these days a year ago that I returned to Estonia after seven years abroad!)

It took me a long time to finally make a decision what to make out of this fabric. I love its texture and I wanted some simple pattern to show it off and at the same time not to be too boring, so I think the lace is a good companion to it. 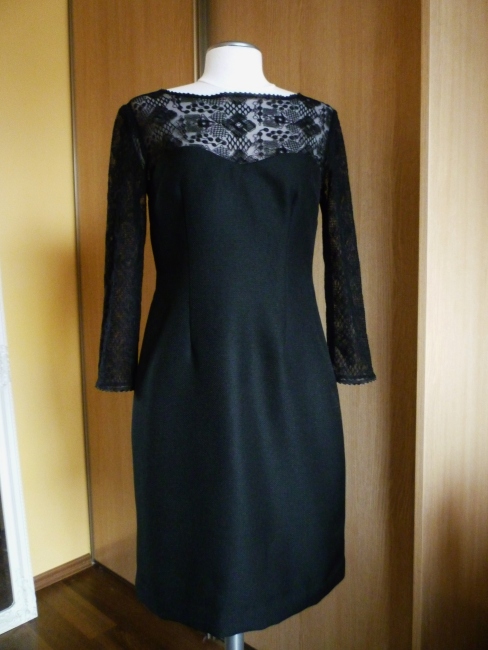 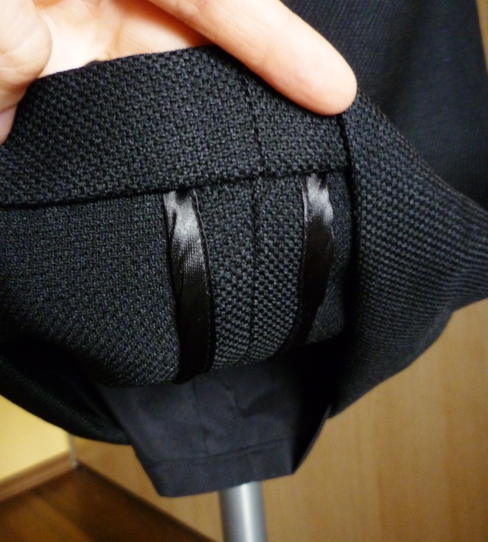 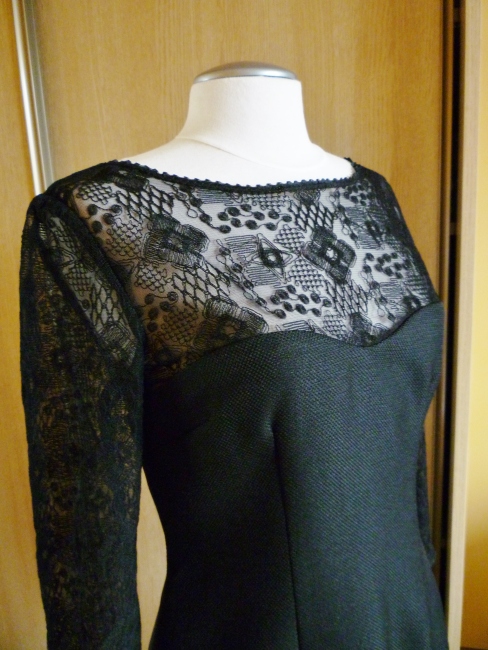 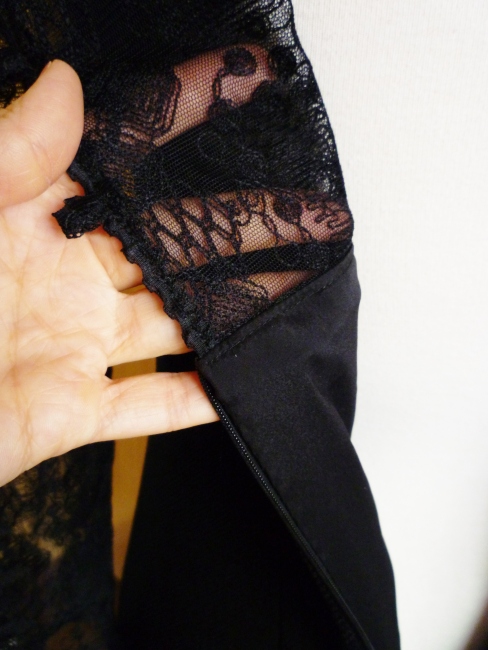 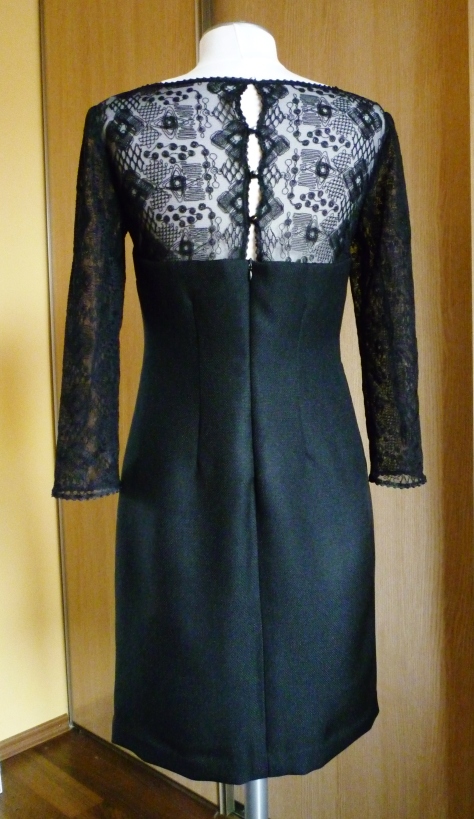 I spent four days in Copenhagen and had a wonderful time, visiting Ordrupgaard art museum where the current exhibition was of James Ensor and Arken museum of modern art where I was lucky to see an exhibition of Frida Kahlo. I also did some bar hopping, dancing, celebrated the Christmas beer, shopped for fabrics, saw and listened to Ludovico Einaudi and on the last day visited the viking ship museum in Roskilde. Sounds like I was running around but it was a smooth sequence of absolutely enjoyable events.

In my experience, Copenhagen is not the number one destination for fabric shopping.  I shopped at the Stof 2000 like last summer (you can see the post on my last visit here) and to my great surprise discovered another shop at the train station in Ishøj, on our way to Arken museum.

The owner was selling everything at 30 DKK/m, which is approximately 4 EUR/m, extremely cheap. As I was in a hurry, I was not able to concentrate very well and so I only got 1.5 m of some cotton plaid fabric. Now that I have figured out what I want to make of it, I need more! 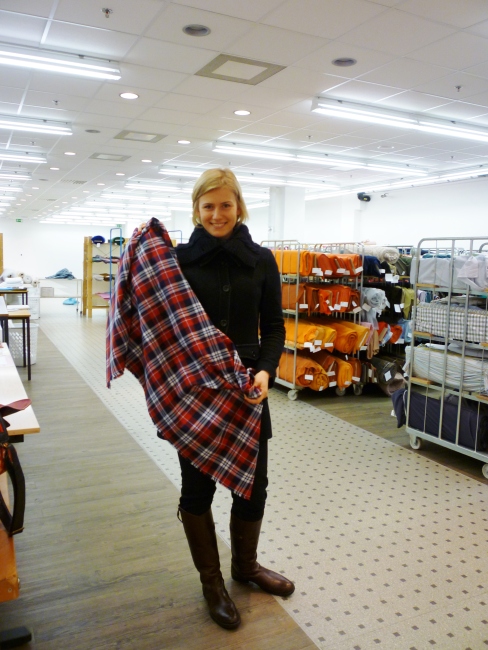 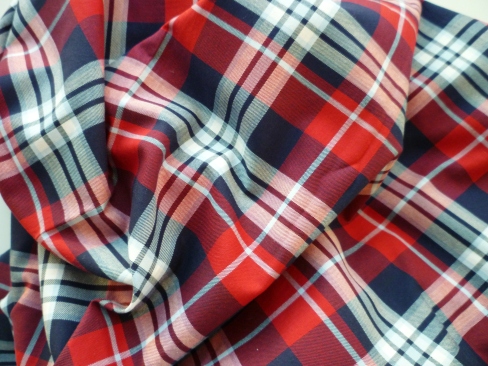 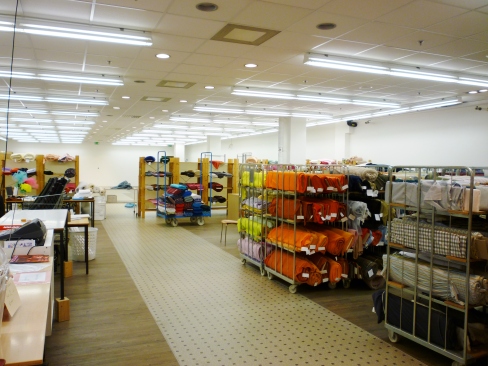 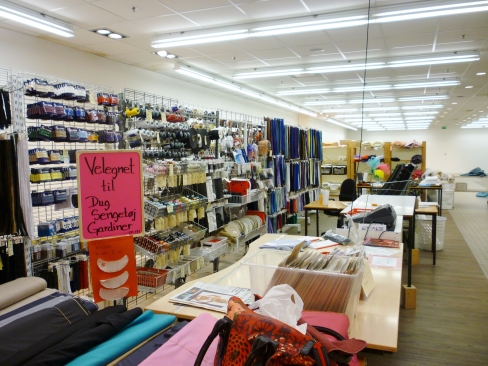 This is Stof 2000 from the outside, (right in the center of the city, very close to Nørreport train and metro station) and the thick jersey with houndstooth and diamonds print that I bought: 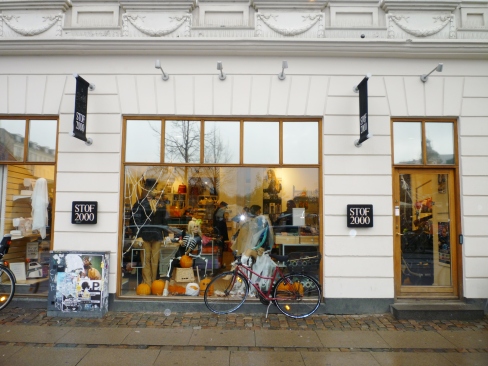 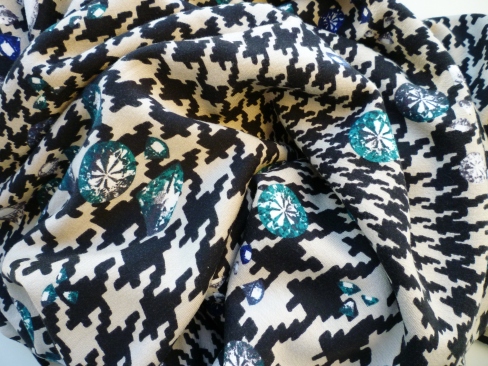 And a few more photos of the trip: 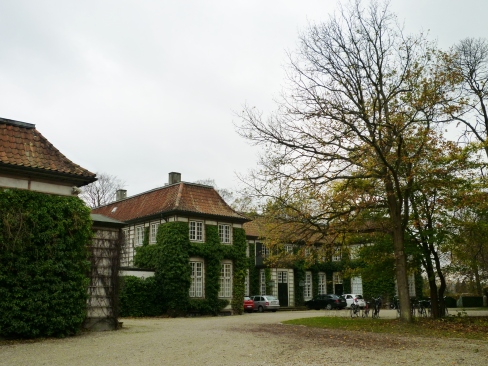 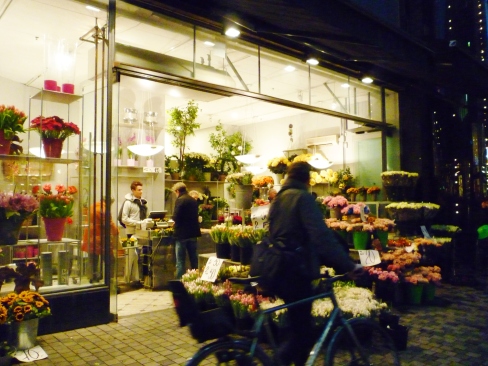 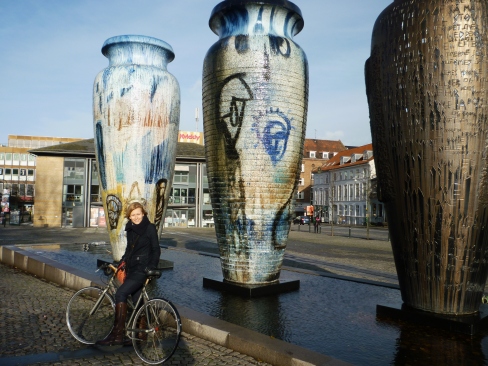 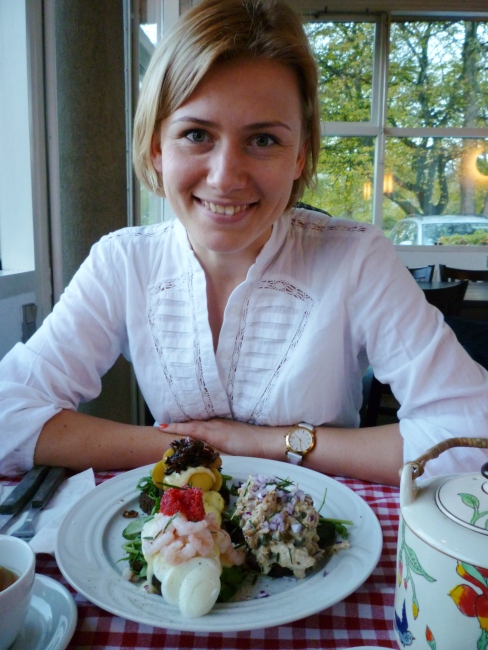 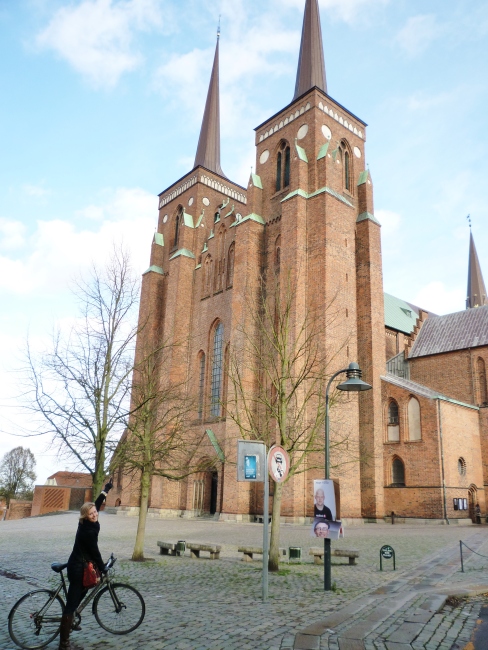 As one of the readers asked for more details on the dress, I am adding a few more photos and a short description of the lace trimming on the neckline and sleeves. 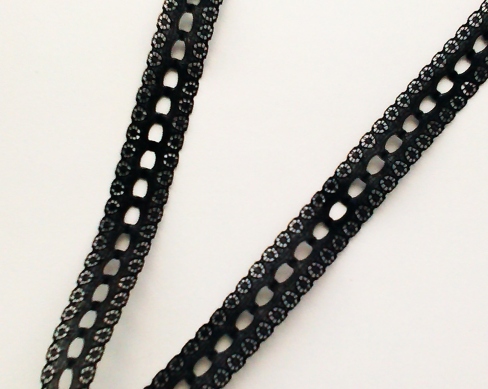 For the finishings of the dress I folded it lengthwise: 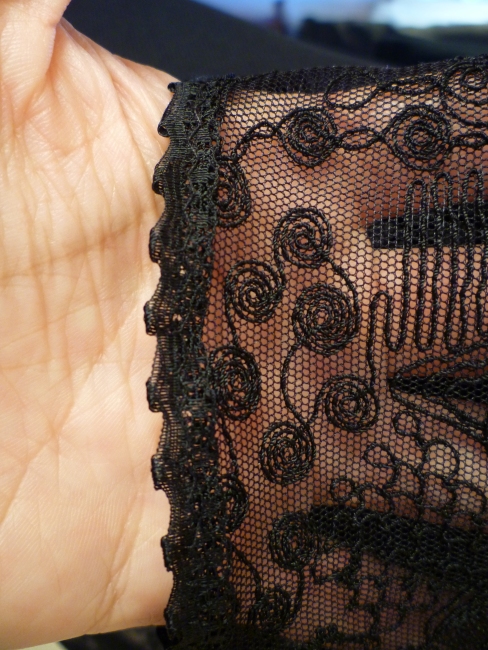 I used the same technique for the back  as well and made the loops for the buttons the same way: 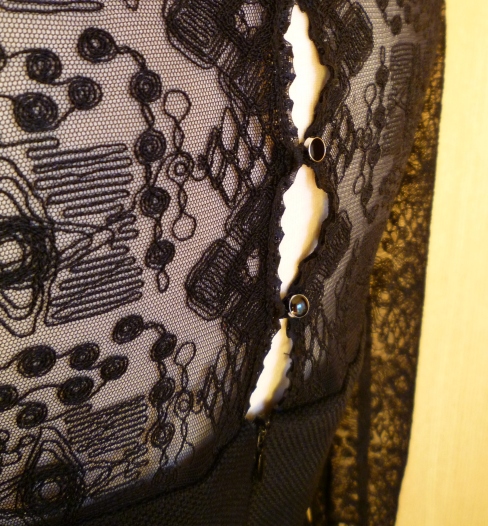 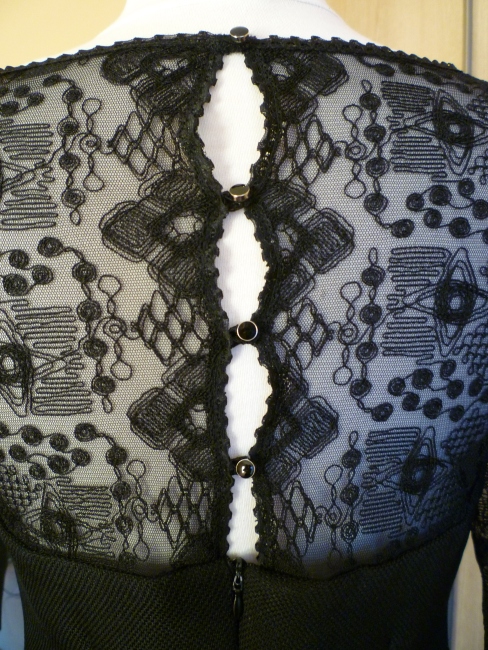 There is no trick for the curves that appear, it is just due to the lace being under tension, if there were no buttons, the would be one big opening on the back.

And lastly, a glimpse of the inside of the dress. Here I just used the same pattern for the lining as for the dress itself and sew the lace part in between the lining and the main fabric, then understitched the lining to the seam allowance to keep it put. 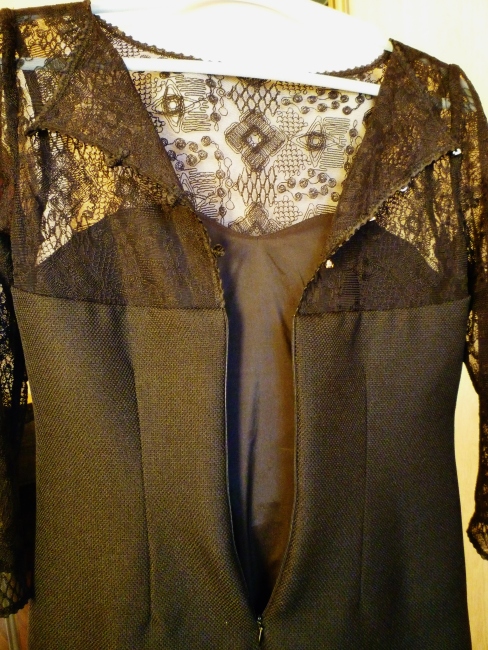 34 thoughts on “The Black Swan Dress”